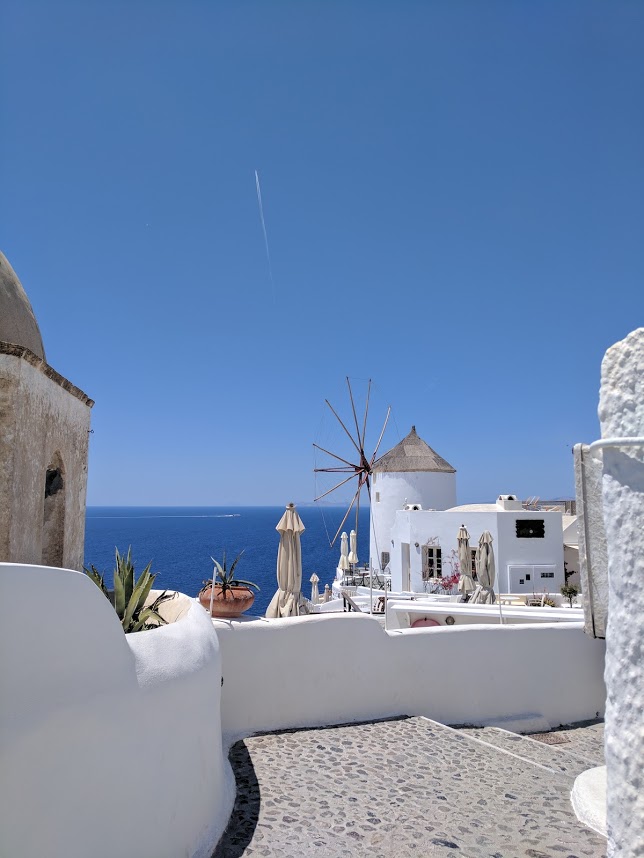 In the last couple weeks, I have been blessed with the opportunity to travel to Greece and Croatia with my darling brother. Our first stop was Athens. Then we headed over to the Island of Santorini for 4 days. Santorini provided adventure, serenity, long walks, and personal enlightenment. Some moments of elation and others of painful self-awareness. All good. 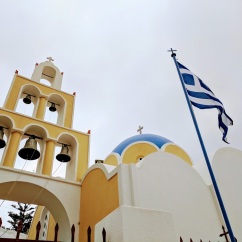 The Island of Santorini is named after Saint Irene. Saint Irene is said to have been brought to faith in Christ through a divine revelation. As a result, she broke all her father’s idols. Out of anger, her father commanded her to be trampled underfoot by horses. St. Irene was unharmed and her father was subsequently killed by one of the horses. But Irene compassionately prayed for her father and he was raised back to life. Her father then was baptized as a believer.

Santorini was the result of one of the largest volcanic eruptions in the last several thousand years. Believed to have erupted about 3,500 years ago, a large caldera surrounded by ash deposits hundreds of feet deep were left.

Late Neolithic (4th millennium BC or earlier) are the oldest signs of human settlement on the Island. Running water pipes indicating the use of hot and cold water on this island appear to be the oldest of such utilities discovered.

Santorini was annexed to Greece in 1912. Its inhabitants are Greek citizens and speak the Greek language.

This resulted in Mr. Cousteau’s strong love for the island. Though, he never found strong evidence of his theory. However, his love of Santorini left an impact still evident today.

I have never scuba dived before, but just had to get this experience off my bucket list at this very location! Of course, I chose the Discovery Dive at Atlantis Dive Centre in Oia (Pronounced ee-ya). My teacher/guide was a lovely man named Raid Raidako! Raid has a strong passion for diving and ocean life. At one point, he had me hold on to a rock underwater so that he could free a precious fish from an old net. What an experience! A whole new world exists underwater and I got to visit!

The majority of the buildings in Oia are white with blue roofs. This was basically for all of Santorini for a while. The buildings were constructed from volcanic stone, which was dark. While the stone was a strong insulator, the dark color absorbed the heat. This resulted in painting the buildings white for reflection of the sunlight.

In 1967, the active military government set a mandate that all buildings in Santorini be painted blue and white.

During our stay in Oia, we had the pleasure of staying at the Yposkafo Jacuzzi House. Our host was an extremely helpful man by the name of Thanos! His wife met up with us at one end of Oia and walked us to their Airbnb home. Along the way, she shared the history and some tips about Oia. My brother and I would agree that this lovely couple was among the best hosts during our vacation! 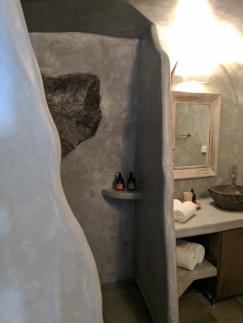 Would any trip be useful without a good lesson on self-improvement? Vacationing with someone who doesn’t see you often, can bring validation to the one in which you do. I was finally able to see where I have been selfish and inconsiderate of others. How I might better communicate.

Being in a 12-step program, I have learned to detach-with love. But, might I be a little too detached? TBH, my marriage has not been good for about 2 years now. This doesn’t mean we don’t love each other, it just is what it is. The resulting pattern has been my detachment from just about anyone in my life. Time to work on balance.

The hubby and I subsequently had a good conversation about how we both detach too much. Our agreement at this time is to focus on becoming better friends. Then we will get to the husband/wife thing again. After all, we have til-death-do-us-part to figure it all out. What we also have, is commitment. When love is lacking, commitment can hold it together until it returns. Marriage is like that.

I ain’t gonna lie. It was painful. I got a cry out of it. But this is also good. I don’t cry very often and it was needed.

Perhaps, part of me was trampled by horses like St. Irene’s father. It kinda did feel that way after all. But once again, a new Elysia was raised back to life. Hopefully a new and improved version.

Santorini gifted me with so much. Though I cannot give it back to Santorini, I might pay it forward.

Is there a place you might want to visit? What does your adventure look like? How do you see yourself growing by this experience?