As Sexual Assault Awareness month winds down, my husband and I attended a viewing of Wildlike at The Lyric Cinema Theater, a local film spot in Old Town Fort Collins.

We weren’t sure what to expect but of course, my hubby is always interested in a movie filmed in the wilderness. There was no letdown in this area. The movie provided a grand visual experience of the picturesque expanse of Alaska.  Denali is now on my bucket list!

The plot itself is quite heavy as it deals with sexual abuse. Yet it did so without being sleazy and all the while, being so very real. The eventual friendship developed by the two main characters is inspirational, without being sappy.

Most of the story is told in the silence. Indeed, it is a quiet movie, yet quite engaging. I don’t think there was a dry eye in the theater during the final scene between the two main characters.

Bruce Greenwood was superb in his portrayal of Rene, a man conflicted over his ability to help this young girl and yet not exactly knowing what she is running from.  His greatest scenes don’t involve much dialogue. You can see it clearly in his eyes and expressions, especially as he finds solid evidence of that which he already knew was true. I am not sure this could have been pulled off by anyone else.

Using the concept “The good, the bad and the ugly”, to give an account of my experience, I have switched it up so as to finish with the good. Because that’s just how I roll.

After young Mackenzie’s father dies, her mother has developed a drug problem and is checking into a treatment center.  Mackenzie is then sent to Alaska to stay with her uncle, whom she barely knows.

Mackenzie is obviously a troubled young woman. This is an important observation one must understand. Most victims of sexual abuse are troubled youth, who are generally not believed when they speak up or are convinced that they are the ones at fault. It is easy for a predator to manipulate young people such as these.

Mackenzie’s perpetrator is her uncle. Another important observation. The majority of sexual abuse is perpetrated by a family member who lives in the home of their victim.

In regard to the two above observations, Mackenzie’s uncle does indeed manipulate her. First by purchasing her a mobile phone and being the “cool” uncle. After the abuse, he then tries to “assure” Mackenzie that he is trying to protect her from the damages caused by “her” actions.

After Mackenzie runs away, she becomes adamant that the police not be involved. She is of course, convinced that they will not believe her – though she never says so, it is well communicated in her firm stance when Rene suggests calling the cops.

Again, the film avoids being too graphic, however, the scenes in which Mackenzie’s uncle enters her bed are quite disturbing. As they should be. Sexual abuse is ugly. If you don’t catch some uncomfortable feels at this point, you might not be alive. These very few (thank God) scenes create a strong awareness.

In one of the scenes, Mackenzie tries to offer sex to Rene. This attempt, of course, is made in silence. Rene is appalled and communicates this  – not so silently. The reality of this scene is many victim/survivors of sexual abuse will offer themselves up as a way of getting what they want or thanking someone for help. It is another ugly truth. Fortunately, for Mackenzie, she has found a decent friend in Rene.

I recently took a free Trauma Informed training given by Matt Bennett, Chief Innovation Officer at Coldspring Center. Having seen this movie two days before the training, I was identifying much of Matt’s talk with some of the film’s characters.

For myself, the most intriguing part of this lecture was when Matt spoke of “passive trauma experienced due to lack of support, empathy, and compassion that the person receives from society.”[1] The character Rene, fortunately, was one who, though unwillingly at first, stepped up and supported a young lady in dire need of help.

In contrast to an ugly world which includes sexual assault, the magnificent vistas of Alaska spoke “quietly” and powerfully of this world’s greater beauty. Rene and Mackenzie’s unspoken words spoke loudly of the beauty of the true connection we humans have in the way we offer up empathy toward one another.

Sometimes, there is no need to vocalize empathy and love. When a fellow human is in need of help, just being there and listening to the spoken and unspoken words are paramount in helping that person get through their traumatic experience.

There is much more to this, but I don’t want to ruin the whole story. You should just go see it…and Stay Blissful my friends – E

You just received a call that is difficult to process. Your good friend has been sexually assaulted. What do you do? What do you say?

Well first of all, just listen – without any judgment. Your friend is understandably distressed emotionally. He/She will most likely waver between shame, guilt and self-blame through anger and frustration at the perpetrator who has just inflicted a great violation.

Let your friend know that all these emotions are valid and normal considering the circumstances.

What your friend does NOT need to hear is any comments or questions about what he/she was wearing, drinking or doing at the time of the attack.

Has your friend gone to the ER or contacted the police? If not, this would be a good time to offer to take him or her. But be careful not to insist. Your friend has just experienced a major and personal ordeal. Not all victims are ready to face this.

Offer to visit your friend and provide comfort, reinforcing the message that it is not her/his fault. Might you be able to be on call anytime your friend needs to talk? If so, then say so. In addition, share with your friend that there are many resources to help.

Whether it is a hotline, professional help, etc., let her/him know you are available to assist in finding numbers and addresses.

When helping your friend starts to weigh you down:

“Secondary traumatic stress (STS) is the emotional duress that results when an individual hears about the firsthand trauma experiences of another. Its symptoms mimic those of post-traumatic stress disorder (PTSD). Accordingly, individuals affected by secondary stress may find themselves re-experiencing personal trauma or notice an increase in arousal and avoidance reactions related to the indirect trauma exposure. They may also experience changes in memory and perception; alterations in their sense of self-efficacy; a depletion of personal resources; and disruption in their perceptions of safety, trust, and independence.” [1]

Symptoms of STS include the following:

Who is at risk for STS?

Mainly professionals who work directly with traumatized victims (especially children). Risk does seem to be greater among women and individuals who have high empathetic natures. In addition, those who have unresolved personal traumas and are helping others with their suffering.

I have been in training to become a Victim’s Advocate for Alternatives to Violence and we had a specific night devoted to the discussion of STS and what to do when and if we begin to experience it. Self-Care is continually discussed throughout every training we took and understandably so.

Self-care can be something you might suggest to your friend, but it is highly recommended that you practice it as well when helping a friend who has suffered the ordeal of Sexual Assault. Some suggestions were:

So if you find yourself being called on by a friend in desperate need, do all you can to be there for him/her. But remember to take care of yourself, lest you find yourself harming the two of you due to self-neglect.

April is Sexual Assault Awareness Month and the theme for 2016 is “Prevention”. Click here for more information. 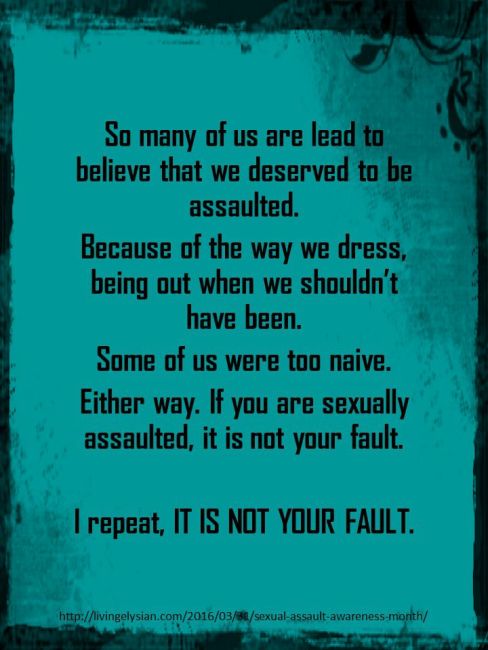 Sexual Assault is real, there is much I can write about it but I came across some videos that speak closely to our hearts and minds. Namaste.

Thank you, Lady Gaga, for this beautiful song:

Men are crucial in the prevention of Sexual Assault. If you are a man, don’t just be a bystander, step up and say something.

And for all, Women and Men I strongly suggest you read “The Gift of Fear” by Gavin de Becker. Below, he discusses a portion of his book with Oprah Winfrey:

So, first things first. Some exciting news: I have begun my training with Alternatives to Violence to become a Victim’s Advocate!

The training is intense, four hours each night after I get off from work. But it goes by rather quickly, as we are a very involved group.

Last night, we were given a training by the SAVA (Sexual Assault Victims Advocate) Center based in Fort Collins, Co. SAVA is an excellent community organization and they have many events planned for the month of April. You can find out more about SAVA and Sexual Assault by clicking here.

One of their most intriguing upcoming events is the Faces Project:

So many of us are lead to believe that we deserved to be assaulted.

Because of the way we dress, being out when we shouldn’t have been.

Some of us were too naive.

Either way. If you are sexually assaulted, it is not your fault.

I repeat, IT IS NOT YOUR FAULT.

At our training, we discussed facts vs. myths and there were some surprise facts and some not so surprise facts…I cannot put this in better words, so here are a few:

MYTH: Sexual assault is provoked by the victim. Victims ask for it by their actions, behaviors, or by their dress.
FACT: Studies indicate that the majority of sexual assaults are at least partially planned in advance. Sexual assault is not a spontaneous crime of sexual passion. It is a violent attack on an individual using sex as a weapon to defile, degrade, and destroy a victim’s will and control over her or his body. For the victim, it is a humiliating, traumatizing situation.

MYTH: Only certain kinds of women get sexually assaulted. Only “bad girls” get sexually assaulted.
FACT: Rapists choose their victims without regard to physical appearance. Victims are of every type, age, race, moral persuasion, and socioeconomic class. Ages of reported victims range from 6 months to 93 years old.

MYTH: Sexual assault is a minor crime affecting only a few women. Its significance is exaggerated.
FACT: Current reports indicate that, nationally, 1 in 4 women and 1 in 6 men will be sexually assaulted at some point in their lives. However, less than 40% of sexual assaults are reported to the police. 125,910 sexual assaults were reported in 2009.

MYTH: Women frequently cry “rape” (i.e., there is a high rate of false reporting).
FACT: False reports make up only 2-8% of sexual assault reports, equal to or less than any other major crime. While some victims later recant, it’s important to remember that there are lots of reasons why victims of sexual assault never even report the crime or may be influenced to rescind initial accounts.

MYTH: Most sexual abuse of boys is perpetrated by gay men.
FACT: Sexual offenders come from all educational, occupational and cultural backgrounds. They are “ordinary” and “normal” individuals who sexually assault victims to assert power and control over them.[1] 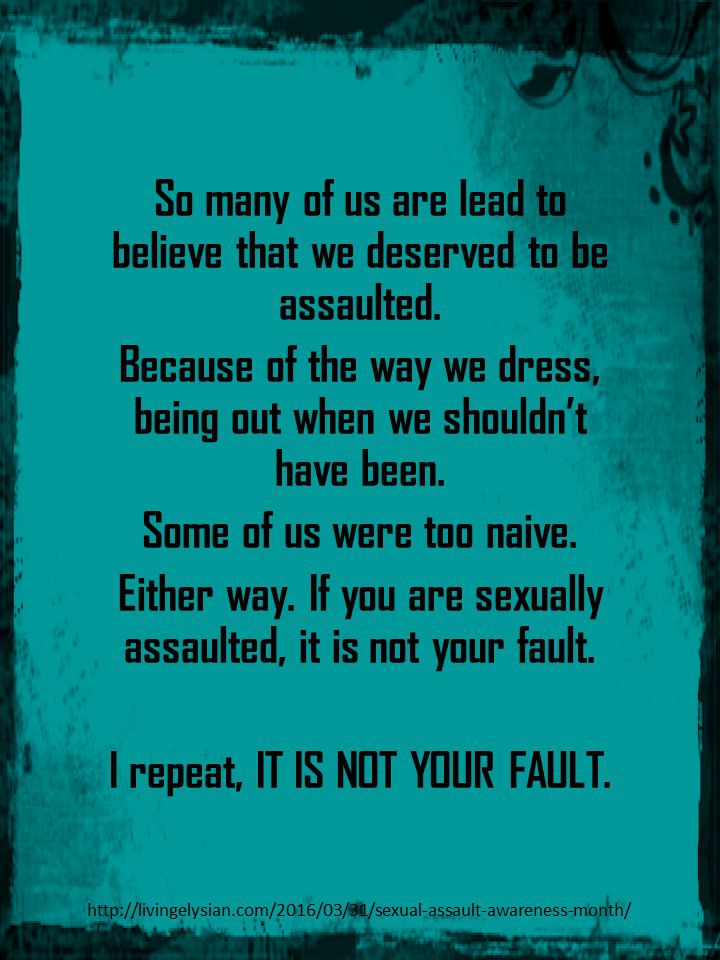 So, how can we be better informed? Awareness. Get the facts, follow your due diligence and not assumptions.

If you are a movie lover, here is a clip from a film that touches on Sexual Assault:

Sexual Assault is a serious issue cross-culturally. Please remember the women, children and yes, even men survivors of sexual assault in your daily prayers and meditations.

Whatever you do, please do not judge. We are all fighting our own battles. This month, we focus on those who have been sexually victimized.

Much love and peace to you today my dear friends. – E