I’m on the phone making reservations with a hotel when my husband’s email pops up “Prince Tribute tonight? Sad day huh?”. “What the F#ck?!” I exclaim three times before I realized I was still on the phone with the hotel clerk. “Oh, I am so sorry. I did not realize I said that out loud.” I say. She replies that it is perfectly okay. I then go on to tell her that I just found out about Prince.

We have a nice long chat afterward about how Prince was much more than a music legend, icon, star, etc. He was true musical genius and royalty. He was Prince after all. We finish up our conversation and I head into HR and ask for a hug. I receive one rather quickly. Everyone is truly shocked by the news. But I feel like I’ve been kicked in the stomach. I have a lump in my throat and I am afraid to speak.

I was twelve when I first heard the song “Controversy”. What was this sound? Was it Funk, Rock, Punk, New Wave? There was no label for it. The music was unlike anything I had ever heard and I was raised by a DJ. Then I saw the video (which I would love to share but Prince hated his music being displayed on YouTube so out of respect I will not do this.) The scene in a church-like setting, with stained glass windows, emphasized the spiritual side of Prince’s sound. Mind-blown!

The lyrics of Controversy, alongside Prince’s hair, dress and makeup made me ponder if he was straight or gay. I would soon find out he was obviously straight. The man loved women! Think about that, though he LOVED women. Not just as sexual beings but as spiritual beings to be cared for, nurtured and respected.  Someone who seemed to exploit women actually saw us as equals. Prince was, wait for it…a feminist. Though maybe silently in his words, he displayed this loudly in his music.

Then came 1999 and Little Red Corvette. This guy was phenomenal. When he made the movie Purple Rain, I stayed up late for a radio show that was playing the whole soundtrack that night. The song Purple Rain itself just grabbed my inner being. It was beautiful, it was ugly and then it was beautiful again.

At the age of 16, I wore satin, lace, and my hair all wild like Apollonia. As a matter of fact, some of the guys at school called me “Apollonia”. The biggest compliment one could give me at the time. I can’t tell you how many times I watched the movie.

Over the years, Prince never ceased to amaze the world with his oddness. He rarely spoke at awards shows and we rarely saw him do interviews. The more we wanted to get to know his inner being, the more he reverted into mysteriousness. Prince even changed his name to a symbol for a while. WTH? What we didn’t realize was that he was sharing everything about himself through his music.

All we had to do was pay attention to the lyrics, feel the vibrations and hear the sound and his message would come through. Was it all about sex, or were there subliminal messages he was trying to communicate? It all depended on the listener.

Some might have considered him a sex-fiend or a lover of exploiting women. Well, yeah as I said earlier he loved women no doubt. But he was pro-being, pro-expression of men and women’s sexuality. He held no judgment of gender. How very unusual for a man’s man. Because he was too, a manly guy. 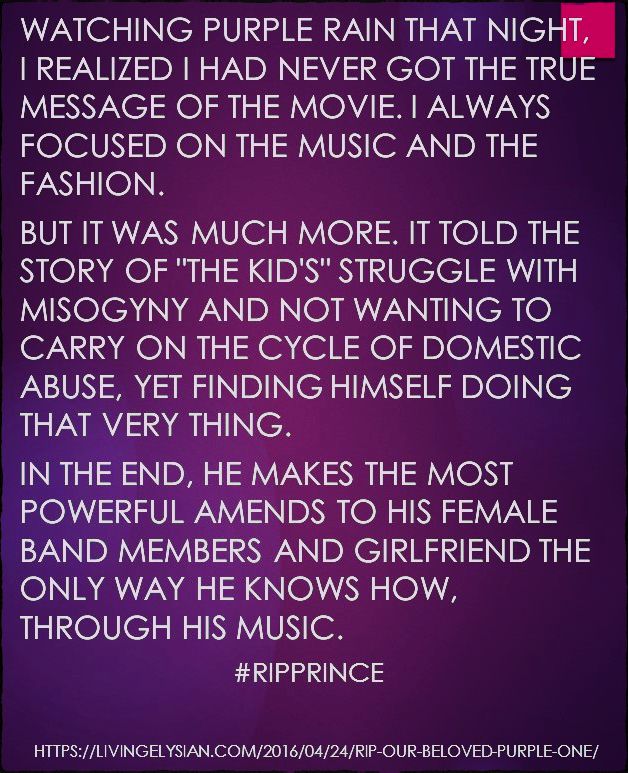 On 4/21/2016, I came home to find my husband had queued up Prince on our stereo and had purple candles burning. We then watched the only movie we could find ourselves viewing.

Watching Purple Rain that night, I realized I had never got the true message of the movie. I always focused on the music and the fashion. But it was much more. It told the story of “The Kid’s” struggle with misogyny and not wanting to carry on the cycle of domestic abuse, yet finding himself doing that very thing.

In the end, he makes the most powerful amends to his female band members and girlfriend the only way he knows how, through his music. The hubby and I found ourselves in tears as Prince sang “I would die for you.” Another gift this artist brought to our lives.

1 thought on “RIP Our Beloved Purple One”