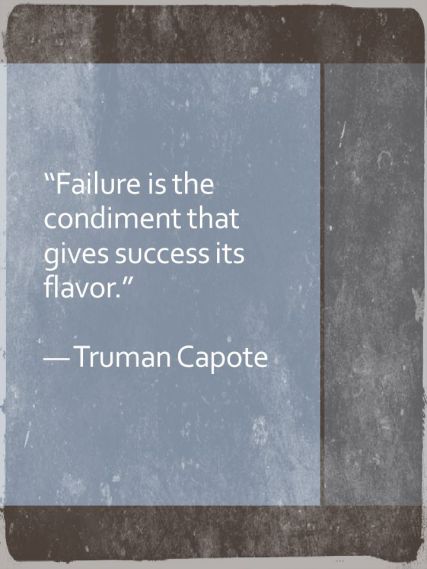 “There is only one thing that makes a dream impossible to achieve: the fear of failure.” ― Paulo Coelho, The Alchemist

When my boys became “tweens”, it happened in a such a way that I felt as if I had been smacked in the face. All of a sudden, they wanted freedom to do things like take the city bus to school and hang out with friends until a later time.

It felt as if  I had been teaching them to ride their bikes while holding on to the handlebars with them all the while.  The time had come to let go of the handlebars and watch them ride. They might fall down and scrape their knees. If they did this, would this reflect on me as a failure of a parent?

Allowing my children to fall and sometimes fail has been a challenge for the nurturing person that I am. I have gotten better at it through the years. They are well into adulthood now, so I better have. Allowing myself to fail has been a completely different story altogether. I say I am a reformed perfectionist, however I have not really challenged myself in the Art of Failing.

What is this said Art of Failing? I am not sure. This is a new concept for me. I do know that I have always feared failure. I am now ready to look it straight in the eye. How did this come about?  Thank you for asking!

At the beginning of this year, I decided I wanted to up my game as an Executive Assistant to the Vice President of Supply Chain Operations. After much research I came to the decision that I wanted to test for the IAAP CAP-OM Certifications. Understanding that these were not going to be easy tests, I nevertheless had no idea just how much studying and how complex the process was going to be.

For four months I met with a study group twice a week at 2 hours a night. In between, there was 180 pages of reading homework. The last 4 weeks were the most intense as I was failing all of the pre-tests. I was beside myself. Everyone in the study group was feeling it. I considered postponing the testing to 2016. Our teacher highly discouraged this. She reminded us how much we had learned and worked toward this. Above all else, whether we passed or failed – we had learned a monumental amount of information.

I began to feel it…the fear. I feared these tests. But no, I didn’t fear them as much as I feared failing.  It didn’t help the fear when I came down with a sinus infection the day before I was to take said exams. Just more fear. How was I going to focus? How would I stay awake? Each exam was 3.5 hours long and with a total of 505 multiple choice questions. Thank God for doctors and sinus medicine. The testing center was an excellent environment for focusing. Fear still present, I went in and completed my mission.

I can’t honestly say how I did. The way the questions were presented made it difficult to gauge. It gets better! I won’t find out how I did for another 30-45 days! But I am okay with that today. I will be patient. Because, well I had an epiphany…

“Driving home from the testing site, I found myself crying. WTF? So I had this epiphany. I had just faced a huge fear, stared it down and kicked its ass! The fear of taking tests? No. The fear of failure. I have never failed a test in my life. That being said, I have strategically avoided some tests so as to hold that average. After all these years, I walked into a test center and took two highly complex tests in one day!

Then I realized that if I do fail, well that might not be such a bad thing. Think about it. If I fail, that might actually be what I need to fully get over this fear. Not that I want that, no. But I now know, that I will be okay whatever the outcome. I love epiphanies!”

I still don’t know if I failed or passed. I just know that I am okay at this very moment. I can wait another 30-45 days to find out.

Either way, I would love to revisit this topic and see how I am progressing through the Art of Failing. How about you? Are you prepared to approach a new art? Can you accept failure? Learn from it? Live with it – Blissfully?